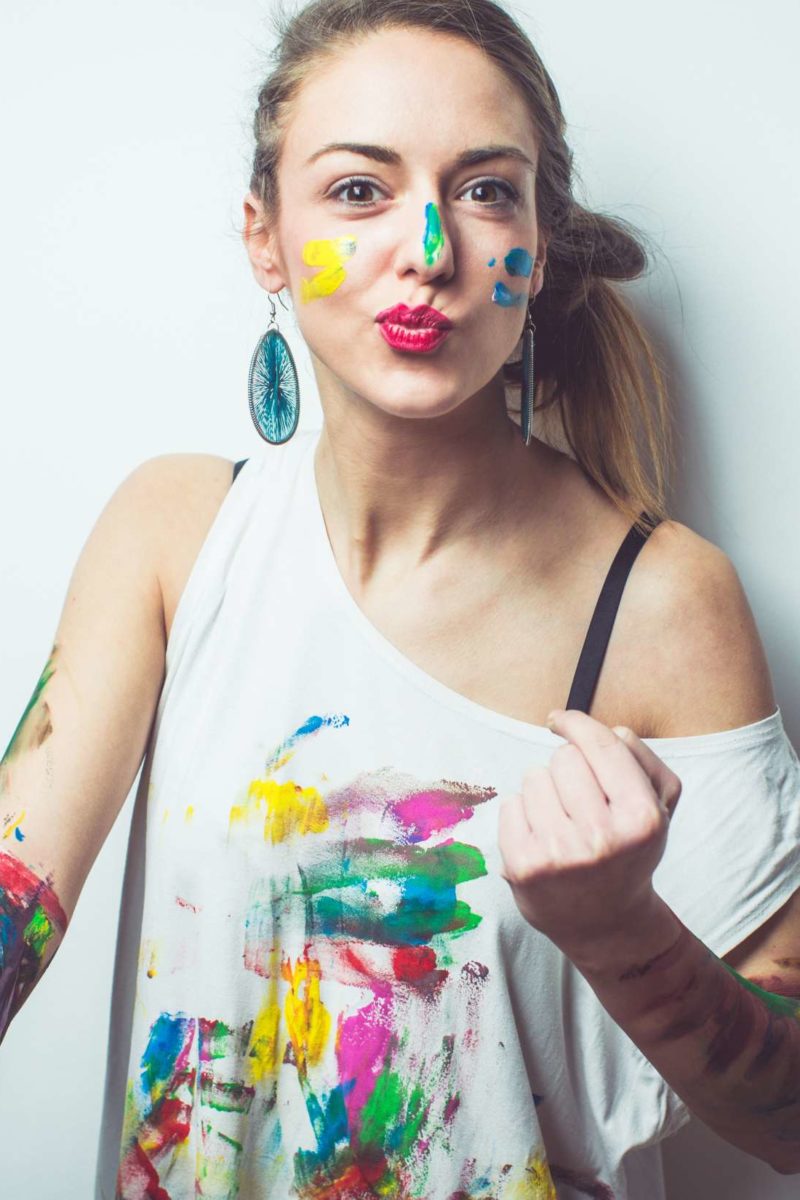 We undertake creative pursuits such as writing, acting, drawing, or dancing simply because we enjoy them. Intuitively, we know that creativity is good for us, and our creative passions make us happy. But what does science have to say about the benefits of creativity?

Share on Pinterest Creative activities make us feel happier, and they’re a great outlet for emotions. But what are their other health benefits?

Some pursue creative activities as a hobby and some do it for a living, but no matter what road we’ve taken to unleash our imaginations and need for free self-expression, it’s pretty clear that making things is part and parcel of being human.

We have been creating since prehistoric times: more than 39,900 years ago, our ancestors left some of their first marks — the outlines of their hands and crude drawings of animals — on the walls of caves.

We could go as far as to say that our need to create things is in our blood; this has served us well over the course of time, as we have learned to create tools and shelters, cook food, make medicines for various ailments, and set bones.

Sometimes, however, we have created things just for the sake of it. It could be said, as Oscar Wilde infamously proclaimed in The Picture of Dorian Gray, that “all art is quite useless.” But is it, really? (I sometimes wish I could tap Mr. Wilde on the shoulder and ask him, “Well, if art is so useless, why did you write so assiduously?”)

Aside from any philosophical arguments that may be brought to the contrary, a lot of research in the medical field has actually suggested that art — and, more specifically, being creative — is, in fact, quite useful for our mental and physical well-being.

Below, we look at some of the benefits that creative endeavors — from writing to dancing — can bring us, and we encourage you to incorporate even more creativity into your own life.

Drawing, painting, or molding objects from clay has been scientifically proven to help people to deal with different kinds of trauma. In a comprehensive article on The Connection Between Art, Healing, and Public Health, Heather L. Stuckey and Jeremy Nobel say that “[a]rt helps people express experiences that are too difficult to put into words, such as a diagnosis of cancer.”

“[A]rtistic self-expression,” they continue, “might contribute to maintenance or reconstruction of a positive identity.”

A number of studies have also found that writing — expressive writing, in particular, which requires participants to narrate an event and explain how it affected them — can help people to overcome trauma and manage negative emotions.

In much the same way as visual expression, this type of writing allows people to take negative situations that cannot be changed and integrate them into their life’s story, creating meaning for events that left indelible marks — such as a medical diagnosis, a loved one’s death, or a violent experience.

One qualitative study that interviewed male survivors of childhood abuse found that asking them to write about their traumatic experiences allowed them — in conjunction with specialized trauma therapy — to make sense of the trauma in deeply personal ways.

Immediately after writing down one’s experiences, the writer might feel an increase in negative emotions as they recall bad incidents. However, the long-term effects are positive, say Karen A. Baikie and Kay Wilhelm, the authors of a review of studies that focused on expressive writing.

“The immediate impact of expressive writing is usually a short-term increase in distress, negative mood, and physical symptoms, and a decrease in positive mood compared with controls,” they write, adding:

Expressive writing doesn’t just help with trauma and negative emotions. A 2001 study found that asking people to write about positive experiences and about “the best self” that they wanted to develop in the future was also associated with an increased sense of psychological well-being.

Similar effects were noted in a later study that asked participants to write about “intensely positive experiences.”

Speaking of writing, research has also shown that writing things down can help with learning and memorization.

However, if you take the shortcut and type the ideas that you want to remember, that won’t actually do you much good. If you want to learn more efficiently, researchers say that you have to go old-fashioned and put pen to paper.

But writing isn’t the only path to a better brain. Albert Einstein reportedly said that music was so much a part of his life that if he hadn’t been a physicist, he would certainly have evolved into a musician.

Well, it does appear that making music can have a significant impact on how well different areas of our brains communicate with each other.

A review published in 2014 suggests that individuals with musical training — such as those who learned how to play an instrument — have improved connectivity between the two hemispheres of their brains.

Another creative pursuit that improves our cognition is play-acting. A study from 2004 found that older individuals who were encouraged to participate in theater performances had improved psychological well-being after 4 weeks. They also exhibited better cognitive functioning.

In particular, the participants experienced better word and listening recall, as well as improved problem-solving abilities.

“Studies have shown that […] individuals who have written about their own traumatic experiences exhibit statistically significant improvements in various measures of physical health, reductions in visits to physicians, and better immune system functioning,” write Stuckey and Nobel.

While it is unclear why, people who wrote about their experiences on a regular basis exhibited an increased CD4+ lymphocyte count.

Share on Pinterest Both writing and listening to music have been linked to an improved immune system response.

CD4+ lymphocytes are key to the functioning of the immune system, and they are one of the main targets of the immunodeficiency virus.

Writing was also seen to help with chronic pain management. People dealing with conditions that made them experience chronic pain had improved pain control plus a decline in pain severity after expressing angry feelings in written form over a period of 9 weeks.

Music therapy has immune system-boosting effects, as well. Music affects our brains in complex ways, stimulating the limbic system and moderating our response to stressful stimuli.

According to Stuckey and Nobel, listening to music “may help to restore effective functioning in the immune system partly via the actions of the amygdala and hypothalamus.” These brain regions are implicated in mood regulation and hormonal processes, as well as in the body’s inflammatory response.

Dance and the body

Creativity can also be a very mobile endeavor, and this mobility brings its own set of benefits. For instance, a study focusing on breast cancer survivors found that dancing helped to improve shoulder function in participants, and that it had a positive impact on their body image.

Moreover, dancing can be a fun way of staying — or becoming — fit. In 2014, a woman who lost 100 pounds just by sticking to her dance routine became a media sensation.

A Korean study from 2007 that looked at hip-hop alongside aerobic dancing found that participants not only experienced improved psychological moods, but that they also reported lower levels of fatigue.

“Invention, it must be humbly admitted,” wrote Mary Shelley in her introduction to Frankenstein, “does not exist in creating out of void, but out of chaos.”

From 1818 — when Shelley’s novel was first published — to the present day (and well before that, and well beyond now) creativity has been the ultimate means of reigning chaos in and drawing benefit out of it.

So, if we can bring some order to our mental or physical states just by journaling, smudging paint, or learning to play the guitar, why not take advantage of that and welcome more art into our lives?

These Are Our 2021 Readers’ Choice Award Winners

6 Inventions by Thomas Edison That Took the World by Storm

25 Luxury Skin-Care Products That Are Actually Worth the Splurge

Why Arts Education Is Crucial, and Who’s Doing It Best