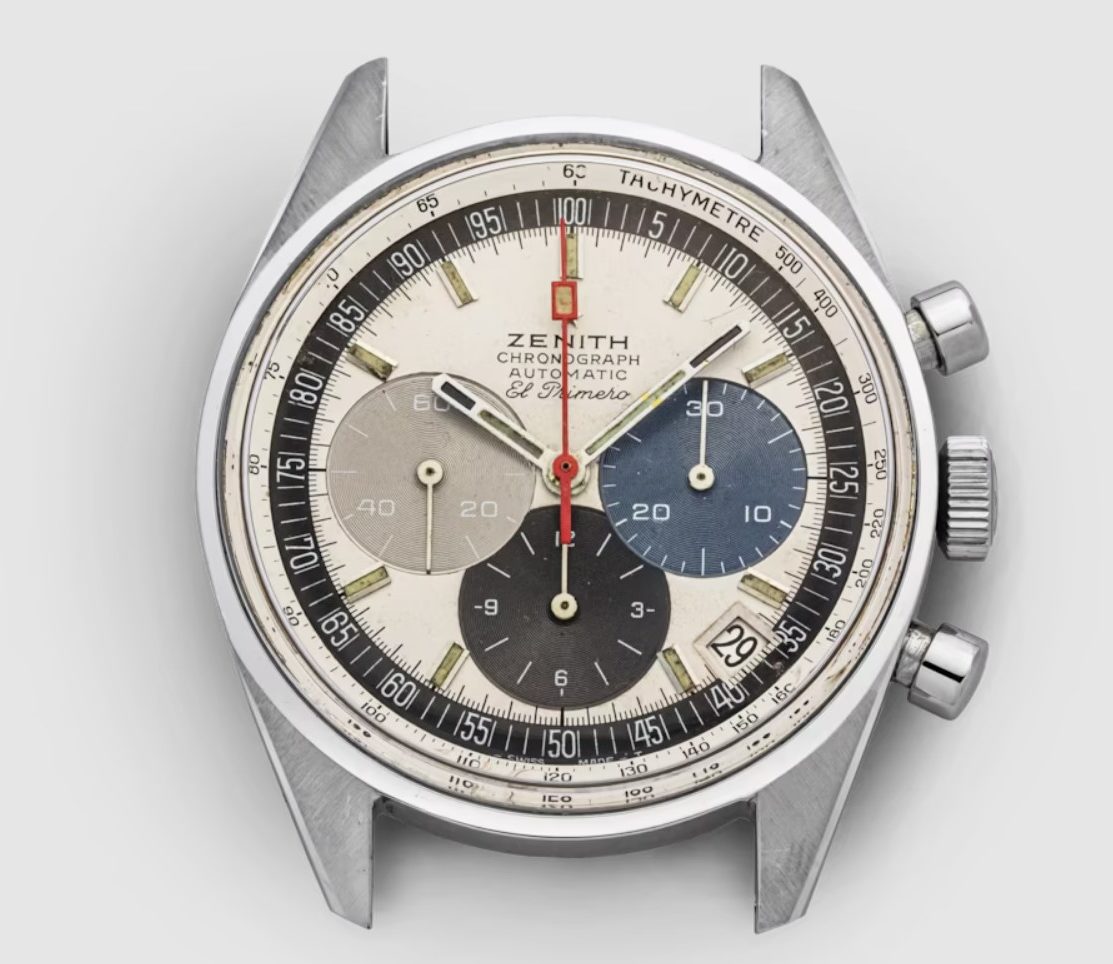 The Zenith El Primero is the numero uno of Swiss chronographs

Welcome to The Icons, a series where we take a horological deep dive into the most legendary watches of all time. We’ll delve into the story behind the watch, its evolution over the years, famous (and infamous) wearers, the classic references, and the contemporary versions you should be checking out. This week, it’s the Zenith El Primero. 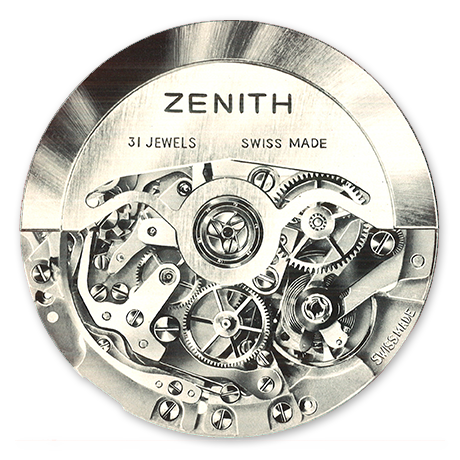 El Primero. A movement and a watch. Or rather, a whole family of watches. And contrary to its moniker, Zenith’s El Primero movement wasn’t actually the first automatic chronograph calibre to market (that title went to Seiko). But the argument could be made that it was the most technically advanced of its time, so much so that it still remains the foundation for many of Zenith’s contemporary chronos. Quite a feat, considering the El Primero debuted over 50 years ago. So how did the El Primero attain its numero uno status among Swiss chronographs? Read on, amigos y amigas… 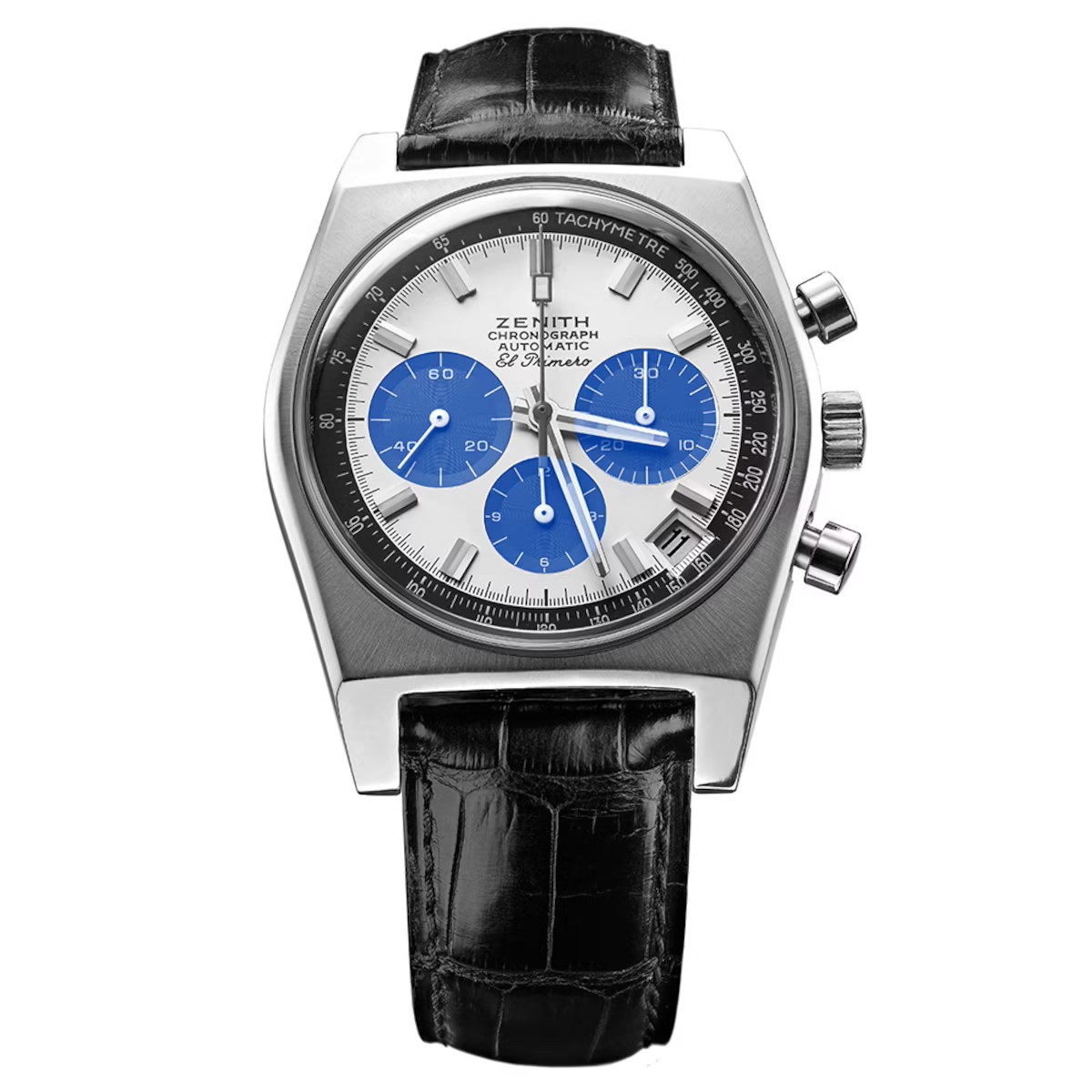 The year was 1969, and like the space race that was blazing across the heavens between the United States and the Soviet Union, a similar competition for technical dominance was afoot between the top watch manufactures of the day. Quartz was just around the corner, and although automatic-winding movements were commonplace, no one had yet cracked the nut of a self-winding chronograph. Development was concurrently underway in both Switzerland and Japan to reach market first, and although Zenith had announced their project years before, the contest was at a fever pitch. Seiko was at work on their calibre 6139, and a Swiss consortium composed of Heuer, Breitling, and Hamilton/Buren with Dubois-Depraz was toiling away at what would become the famed Chronomatic/Calibre 11. When push came to shove, it was Seiko who introduced theirs first in the Speed Timer that made its bow at the beginning of the year, followed in April by Heuer’s iconic square-cased Monaco sporting the Calibre 11. And although Zenith showed the El Primero prototype in January, it was September before a watch utilising the movement was actually released. Fans will argue it was worth the wait. 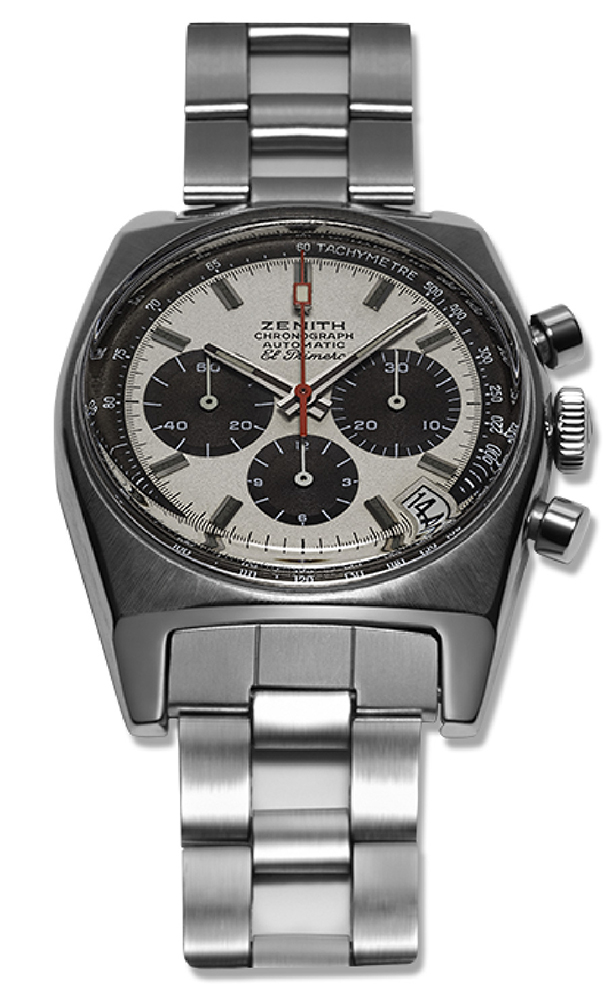 The triple-register column wheel calibre was a step up from more common cam-actuated movements, and additionally, it ran at a higher frequency of 36,000 vibrations per hour. The high-beat movement allowed for measurements of 1/10 of a second, and gave the chronograph hand an exceedingly smooth sweep. It was arguably the best-of-breed among the new autowinding chronos, and debuted in two of Zenith’s most sought-after models, the square-barrelled A384 and the more traditionally-cased A386. 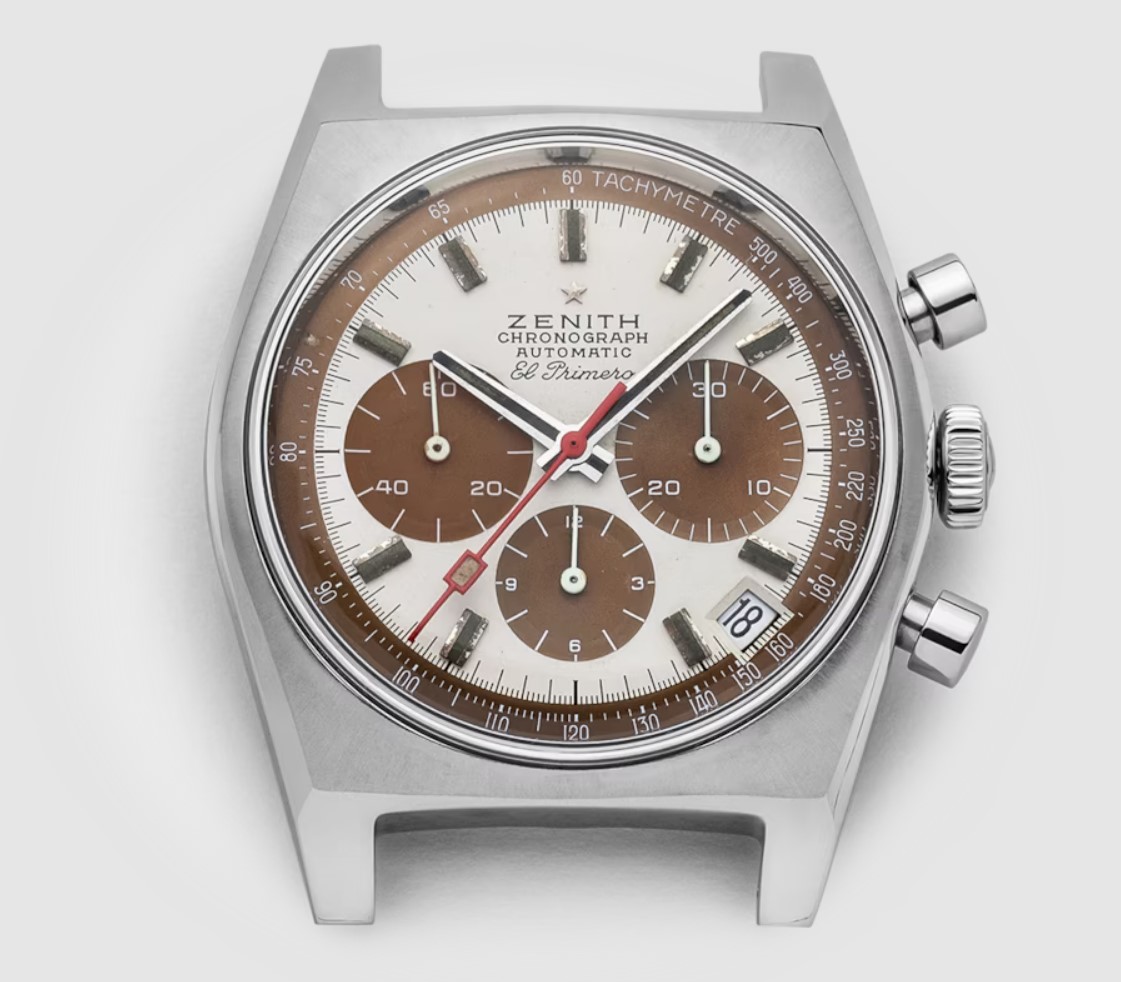 Both models featured a tricompax dial layout and a date at 4:30, and it was at this time the A386 introduced the legendary tri-coloured subdials that became the most recognizable calling card of the El Primero design language. The A384 measured 37mm across, and the A386 38mm, and both wear exceptionally well. If you need any more proof of their vintage awesomeness, the contemporary reissues of both models have been extremely hot sellers for Zenith. 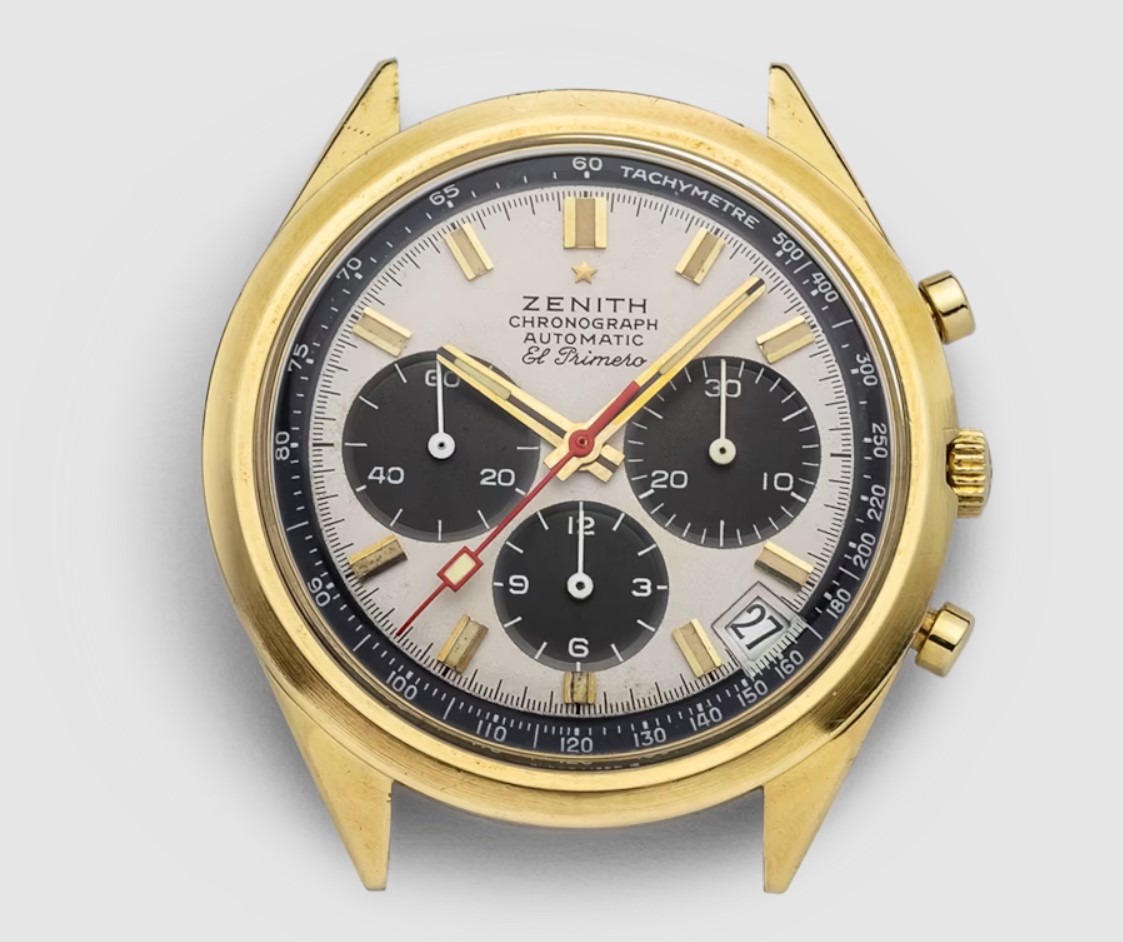 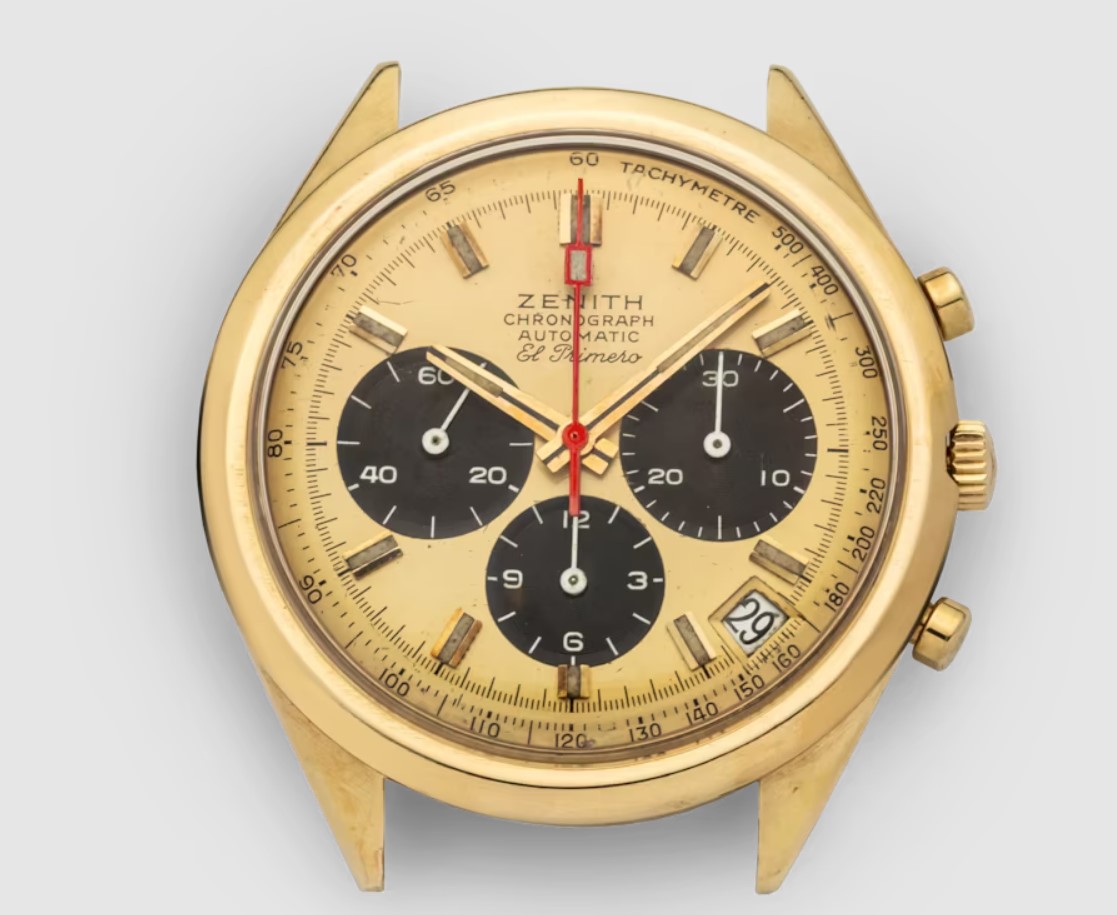 Many other stunning references followed, including this rarer-than-hen’s-teeth solid 18k gold G581, and the gold-on-gold panda glory of the G582. 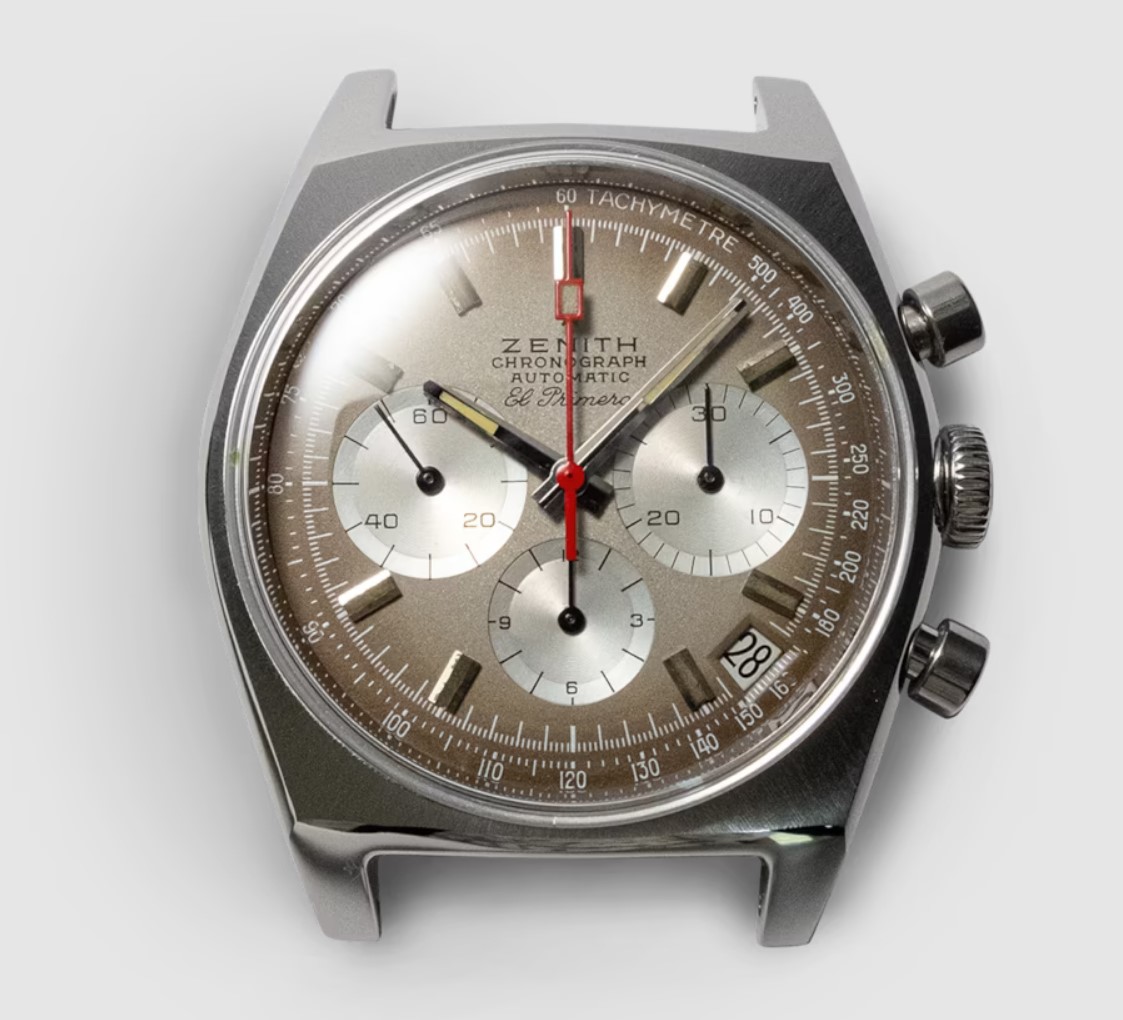 Another gorgeous Zenith of the same era was the A385, resplendent in the slow burn of its smoky fumé dial. 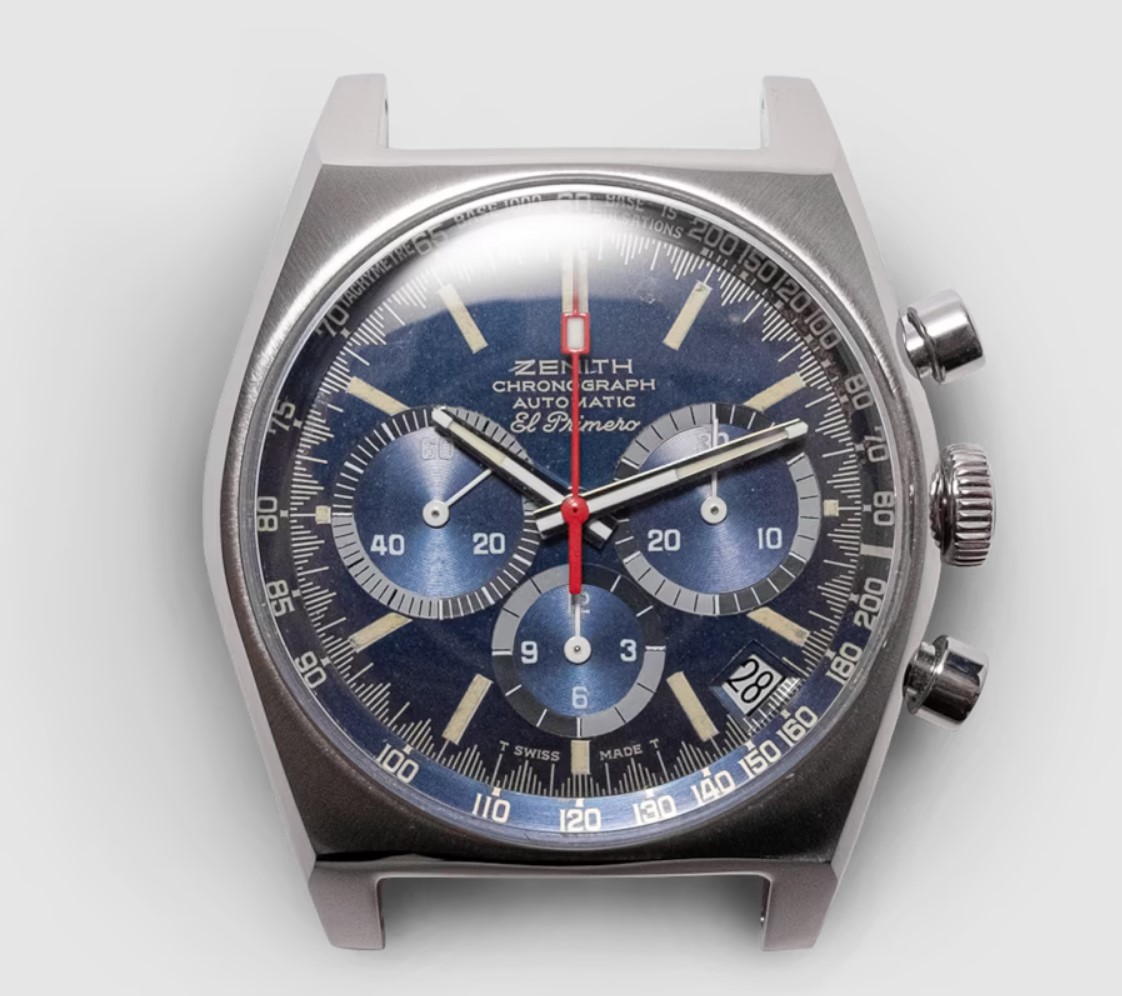 The A3818 that was introduced in 1971, nicknamed the “Cover Girl”, is a winsome vision in blue that has also seen a recent reissue. 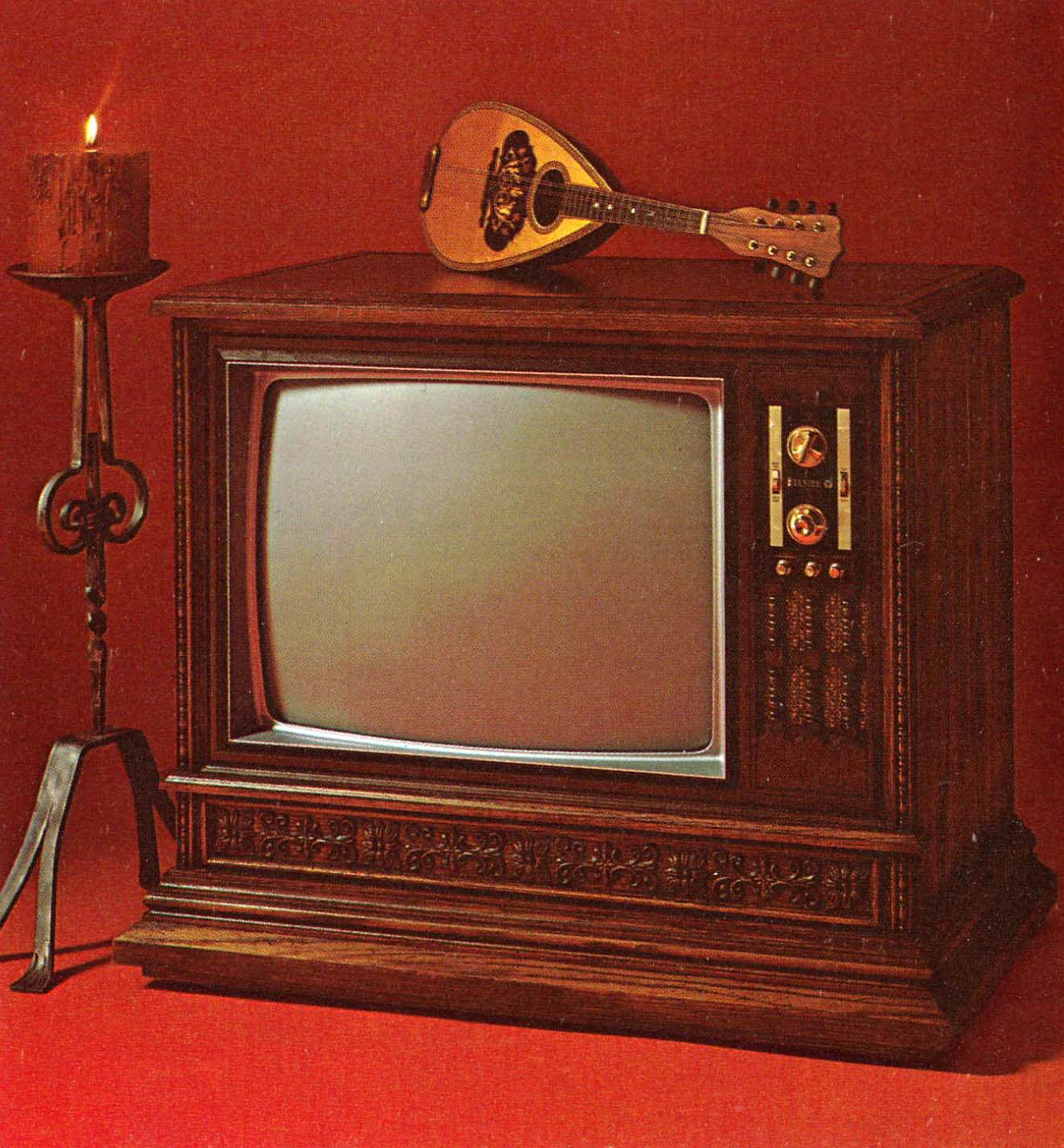 It’s tragic to consider that the El Primero movement and the beautiful watches it powered almost became a footnote in horological history. During the 1970s, quartz was taking mechanical watches’ lunch money, and as Zenith’s place in the market eroded, they were bought out by…wait for it…the Zenith Radio Company. The two companies had no relation whatsoever. Remember those giant wooden console TVs of the ‘70s? Blame Zenith.

Brand name aside, the two companies couldn’t have been philosophically further apart. The decision was made to cease production of the El Primero movement in 1975, in order to concentrate solely on quartz watches, throwing away much of Zenith’s horological legacy. Happily, one of Zenith’s watchmakers, Charles Vermot, had the foresight and initiative to ferret away a good amount of the El Primero’s tooling, componentry and technical drawings before the higher-ups could bin the entire history of the iconic calibre. He actually hid the priceless tools and parts in a section of the attic (which was later walled-off), I kid you not.

Good thing, too, because all that history was utilised when Zenith revived the El Primero movement in the ‘80s. Thankfully by then, the demand for fine mechanical watchmaking saw a resurgence that continues to this day. The resurrected El Primero movement was still one of the watch world’s leading automatic chronos, to the point that many other brands sourced them from Zenith for their own chronographs, including the mighty Crown itself, Rolex, who installed a modified El Primero (with a slowed-down beat rate) in their Daytona. And while vintage Daytonas have sky-high valuations, these “Zenith Daytonas” are particularly well-regarded. High praise, indeed. In fact, the movement may have saved the entire brand.

As for Zenith’s own watches, the El Primero moniker is alive and well, with modern versions of the movement powering both contemporary and vintage-inspired re-editions to great success. 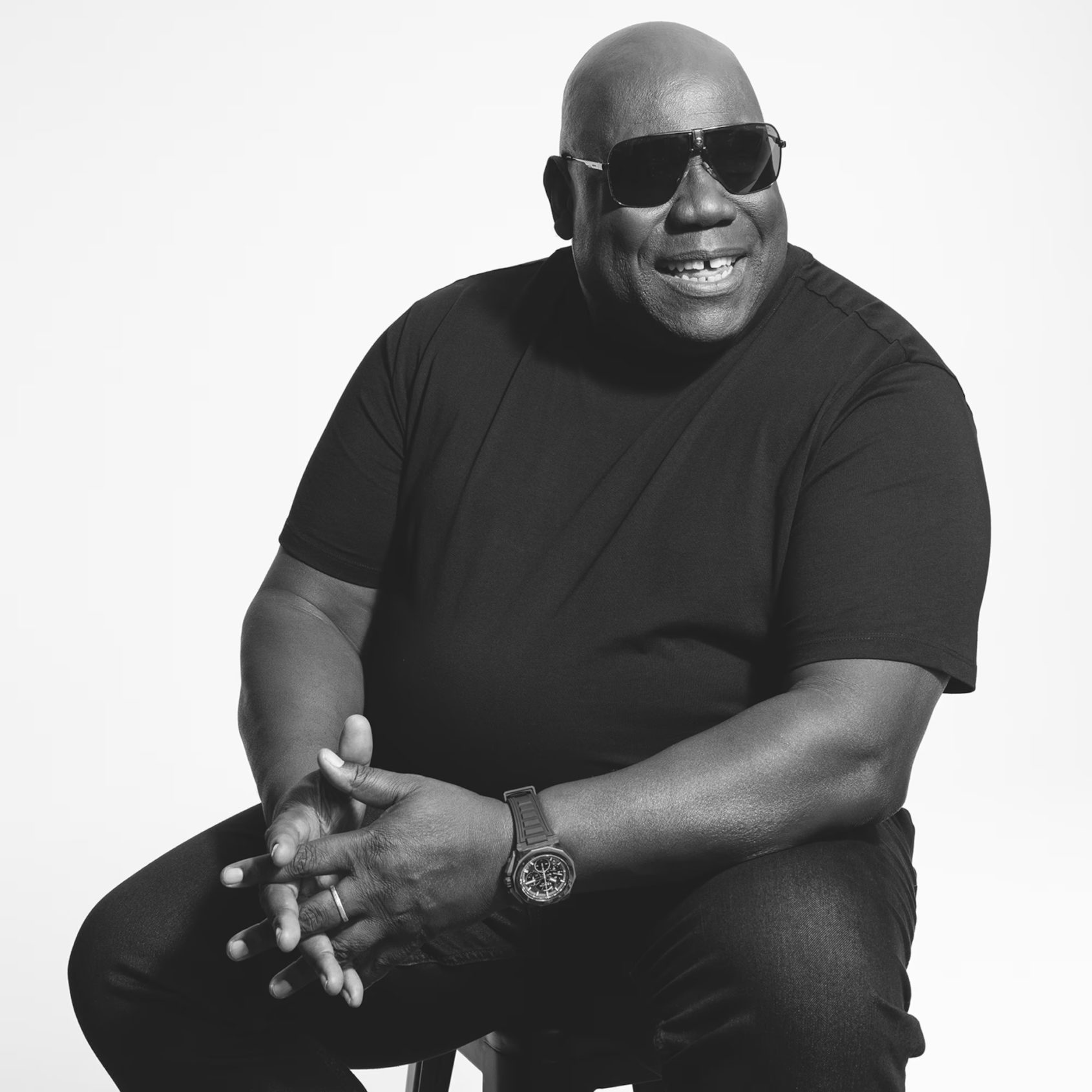 Superstar DJ Carl Cox is a friend of the brand, and actually has his own special edition chronograph, the Defy El Primero 21 Carl Cox. It features a carbon fibre case, and a subdial that resembles a vinyl record. 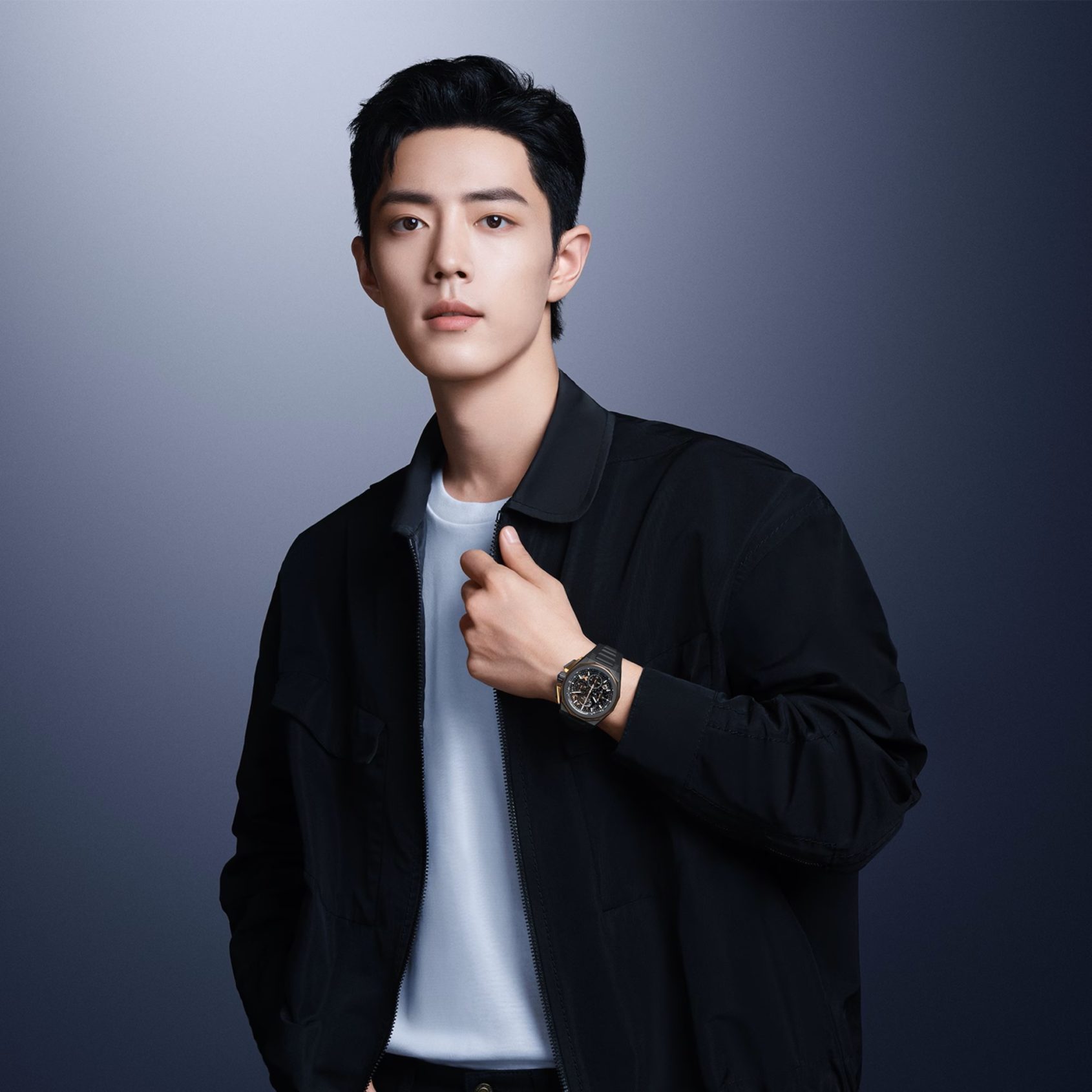 Chinese actor and singer Xiao Zhan is an international star, and an ambassador for the brand that features a star as part of its logo. 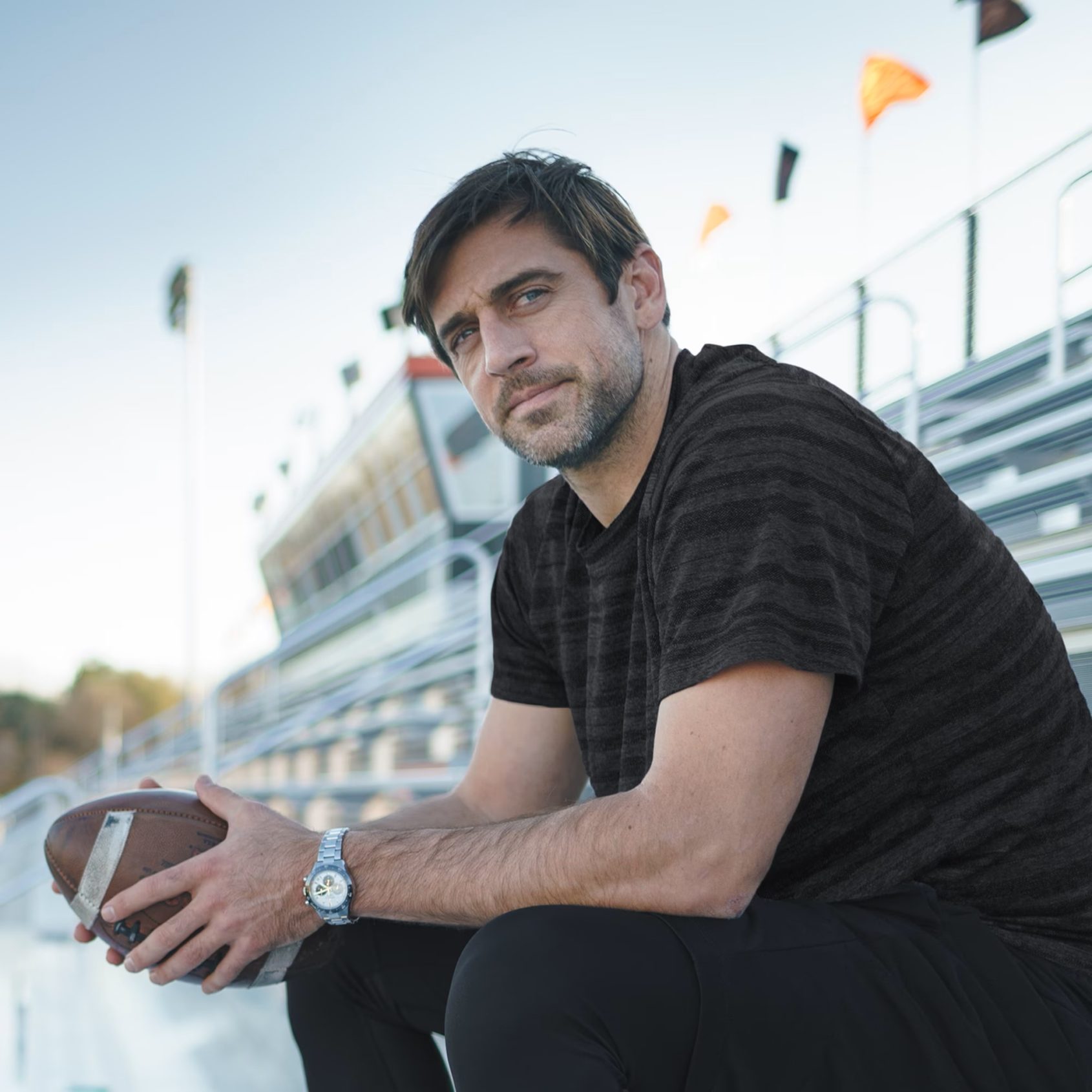 Green Bay Packers quarterback and NFL MVP Aaron Rodgers is another Zenith ambassador, and like a lot of us, he favours the Chronomaster Sport with the El Primero movement. 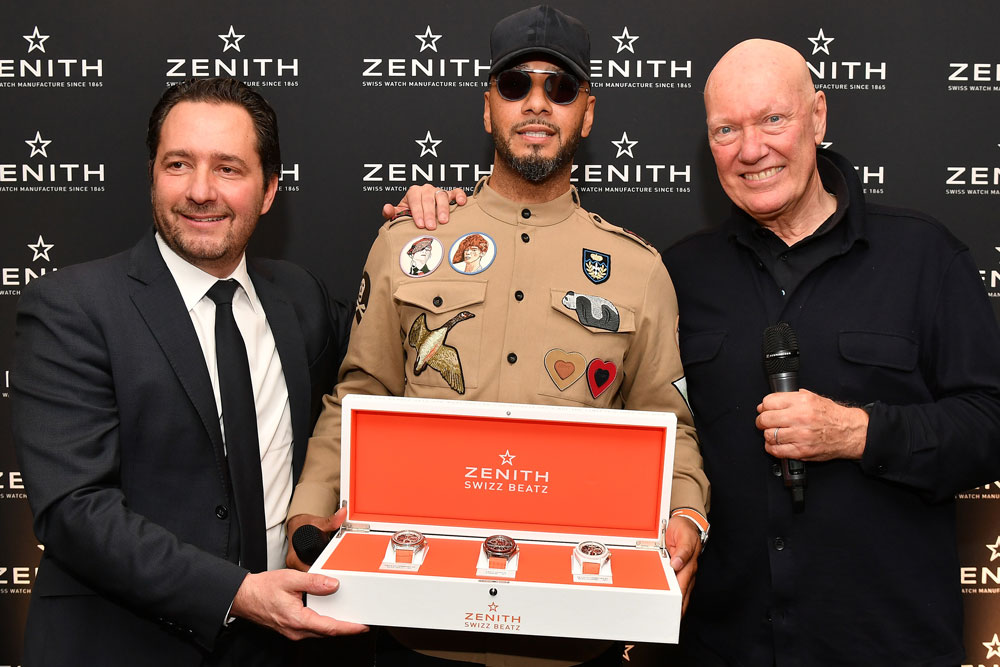 Super-producer (and Mr. Alicia Keys) Swizz Beatz is a huge watch guy, and has released several collabs with Zenith, all limited editions based on the Defy El Primero 21.

I try my best to be objective when it comes to writing about watches, but damn, Zenith just gets me. Here’s a shortlist of my favourites from the current roster. 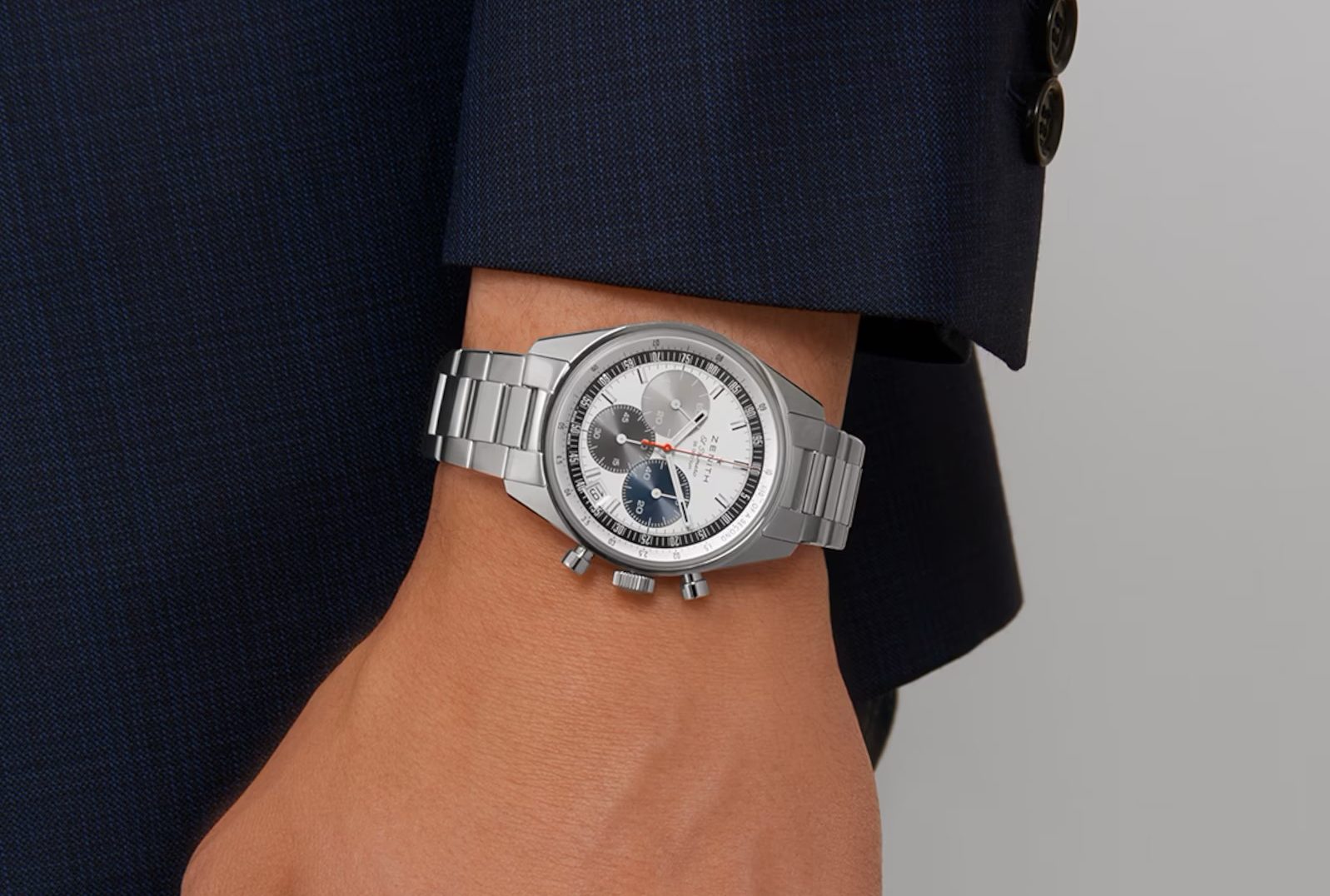 I could honestly stop right here. The Chronomaster Original is the spitting image of the O.G. A386, including the tricoloured subdials and 38mm case, but it utilises the modern-day El Primero 3600, good for a weekend-proof 60 hours. There’s something to be said for not having to worry about babying your vintage artifact, and this model is the answer. 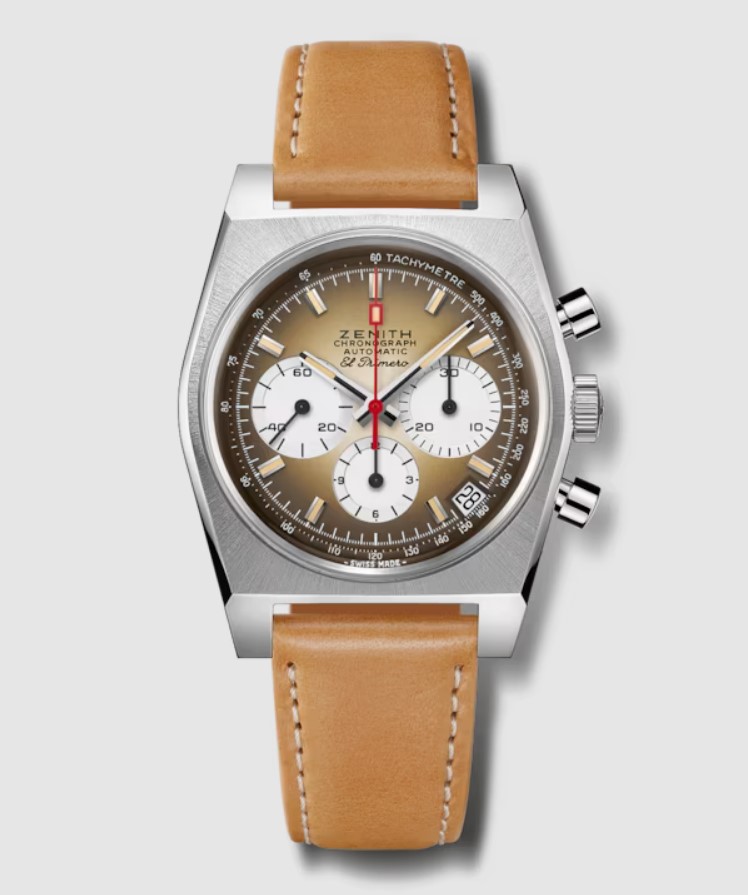 A just-right slice of retro goodness, the modern A385 revives that squared barrel case and warm fumé dial. When worn on the tan leather strap, it sings like few others, and you’ll swear it time-travelled from 1969. Delish. The big and bold Chronomaster Sport has been the Daytona-killer we all needed since The Crown started minting them from Unobtanium. This boutique edition kicks things up several notches by colour-matching the ceramic bezel to the grey, anthracite, and blue subdials. 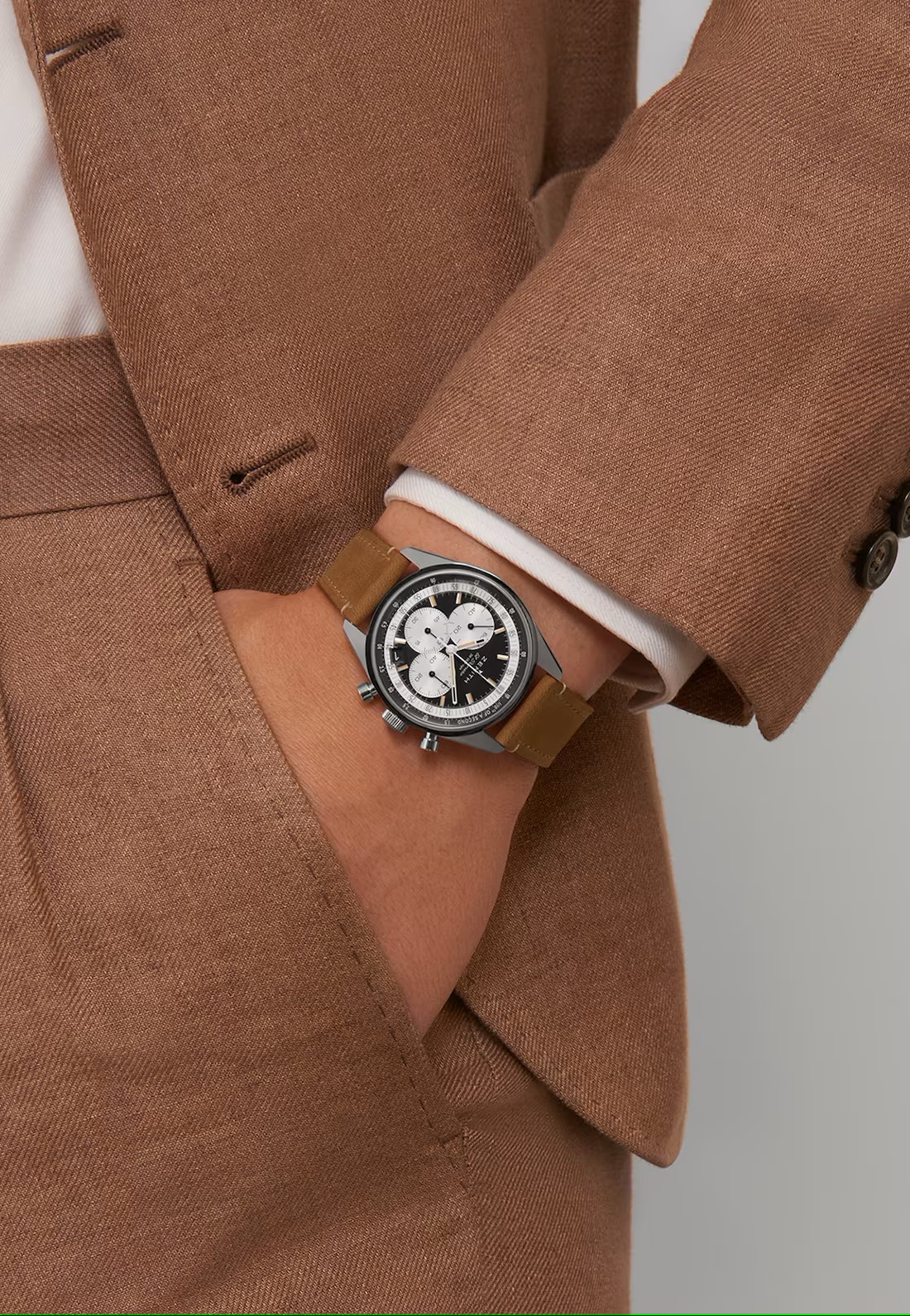 Another beauty based on the A386, basic black never looked so good. The evil panda dial is as cool as one on any Navitimer or Autavia, and has just the right amount of fauxtina warmth. 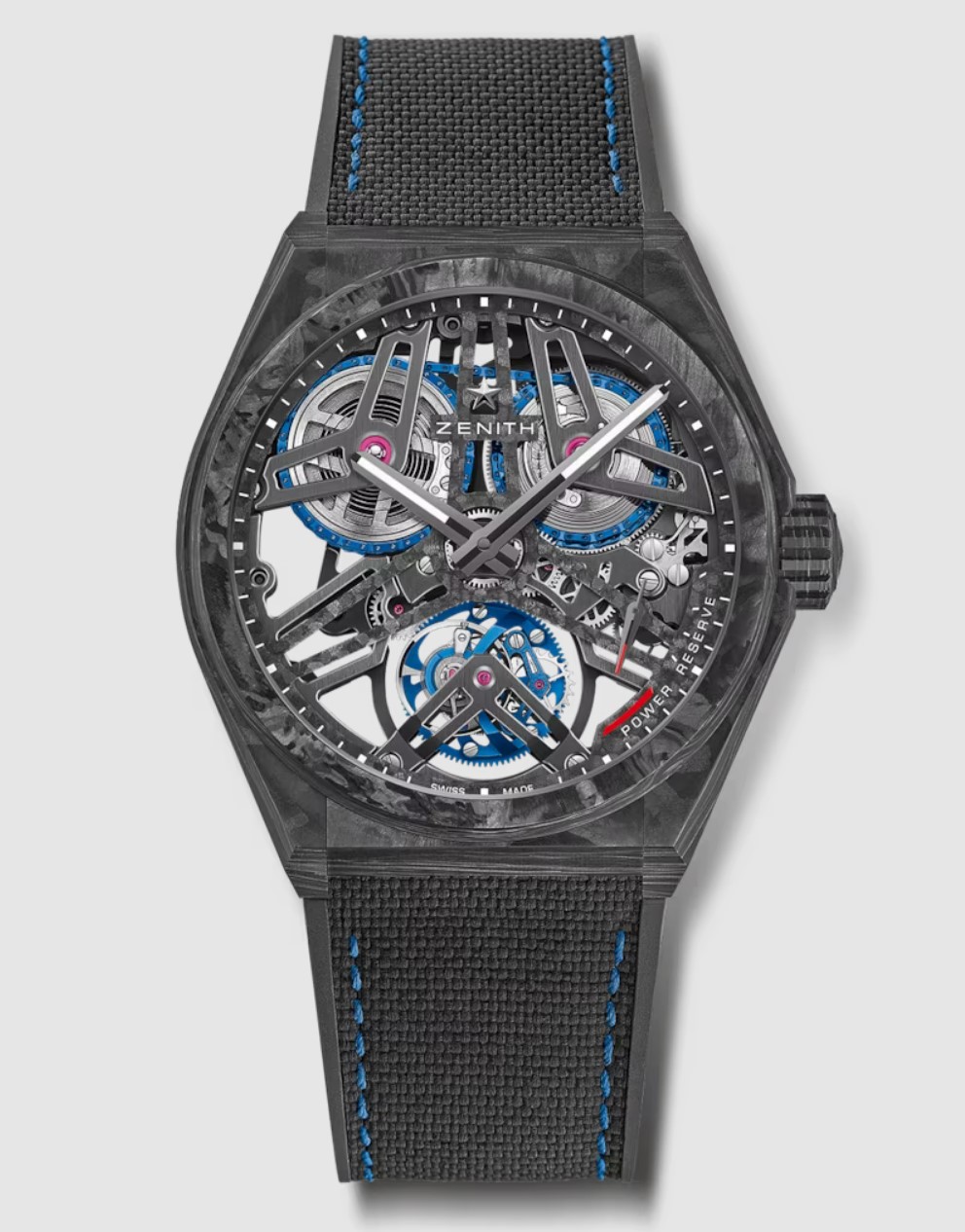 From the unapologetically throwback to the technically bleeding-edge, the openwork dial of the carbon Defy Fusee Tourbillon is a visual maelstrom for the well-heeled watch fan. The skeletonised movement is a showcase for the tourbillon, as well as the fusee and chain constant force mechanism. If you’ve ever wanted to wear a Formula 1 racer on your wrist, this is a prime candidate.